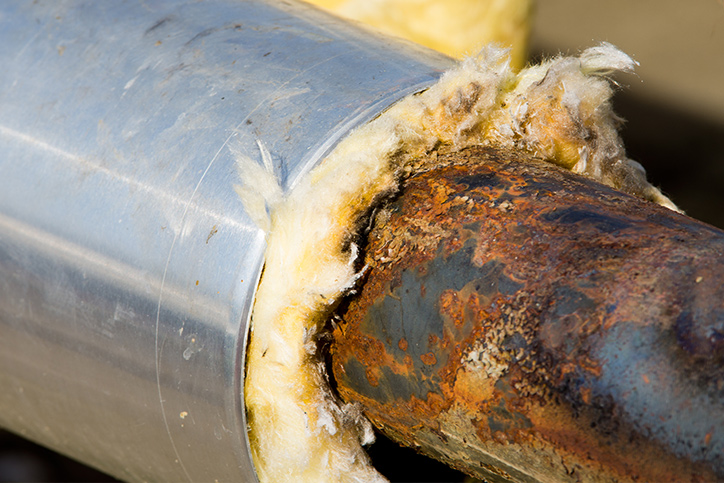 An essential but hidden challenge facing owners and operators of facilities that have insulated piping or other insulated equipment is preventing or remediating corrosion of the metal surfaces under the insulation.

Unfortunately, corrosion is often hidden by the insulation and may not be discovered until it is too late.

Left untreated, CUI can lead to thinning of pipe walls or other equipment that will ultimately allow leaks, ruptures, and other failures to occur, and can lead to serious, even catastrophic results.

Causes of Corrosion Under Insulation

Corrosion can occur anytime, and anywhere metal is exposed to water and oxygen.

Oxygen, of course, is present almost everywhere. Water can come from rain, condensation, leaks, and other sources.

CUI is further aggravated because the environment under insulation is often conducive to corrosion. Temperatures are usually high, and insulation can trap moisture against the metal, keeping the area wet for long periods. High temperatures and prolonged wetting promote accelerated corrosion. Additionally, salts such as chlorides and fluorides present on the metal will further accelerate the corrosion rate.

Costs of Corrosion Under Insulation

CUI can be an expensive problem to remedy.

According to a 2001 study entitled “Corrosion Costs and Preventative Strategies in the United States,” the direct cost of corrosion is approximately $276 billion per year. When indirect costs of corrosion are considered that number is almost doubled.

CUI is particularly challenging to identify because it is often hidden under insulation and may not be noticed until it becomes a serious problem.

Many insulation manufacturers attempt to minimize the amount of chlorides and other salts in their insulation products during manufacturing. CTL

Engineering has worked with many insulation manufacturers to test the amount of salts present in insulation and to determine if the insulation will contribute to corrosion if it becomes wet.

Also, CTL Engineering assists facilities and building owners and operators by determining the extent of corrosion damage that has occurred when corrosion under insulation is discovered. Analysis of CUI often involves testing the remaining wall thickness with ultrasonic gauges to determine if the piping or structure is safe for continued use. Samples of the affected piping, structures, and insulation can also be subjected to in-depth laboratory analysis to determine the cause and extent of the problem.

CTL Engineering offers nondestructive testing of insulation according to the following standards:

CTL Engineering offers insulation testing services for insulation manufacturers and distributors and evaluates piping and metal structures to determine the extent of a corrosive attack.

CTL Engineering has the experience and capabilities to assist you with your insulation testing or corrosion investigation.