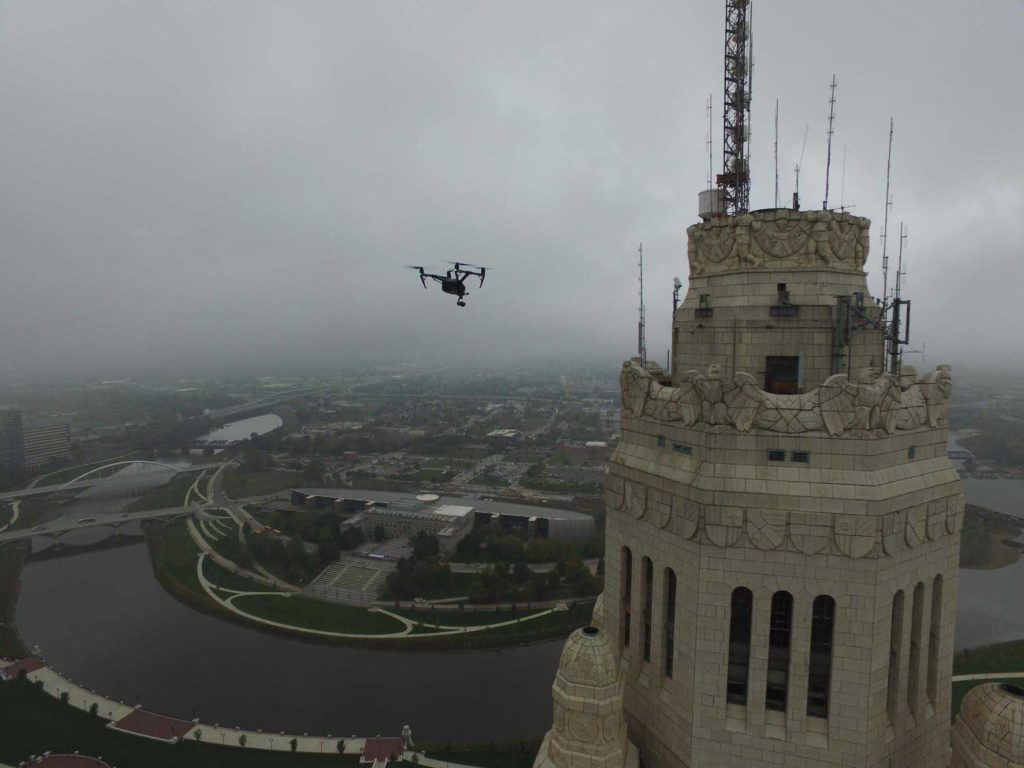 CTL has three FAA-licensed drone pilots on staff to perform a host of inspection duties, primarily supporting our building envelope testing service. Before the emergence of aerial drones, inspecting the exterior of large commercial structures like office towers and convention centers was a daunting affair: Workers either had to repel down the sides of buildings with ropes and harnesses or navigate the exterior with complex scaffolding. It was slow, painstaking work that posed serious risk of injury if something went wrong.

A camera-equipped drone, by contrast, can shave days or weeks off an inspection project and substantially shrink safety risks. These are the three building inspections in Columbus in which CTL drone pilots went to work:

The city requires critical observation reports (CORs) every five years for urban structures taller than three stories, older than 20 years, and within 10 feet of a public right-of-way. A COR looks for:

Our drone expertise helped us land a COR inspection project for the 41-story Rhodes Tower, which houses 4,000 state employees in downtown Columbus. Completed in 1974, the Rhodes Tower is Ohio’s fifth-tallest building and the tallest in Columbus. 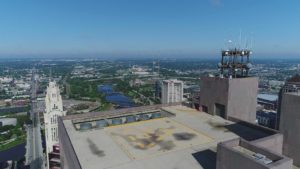 Flying a drone and capturing video footage of the skyscraper’s exterior enabled us to inspect it in six hours — a fraction of the days required for a conventional inspection.

Flying a drone in a downtown district poses a few logistical issues. Clients need to know precisely when and how the inspection works, and it must be done with a minimum of disruption to nearby sidewalks, hotels, and office buildings. Hence, all the parties responsible for those locations need to be informed about the inspections.

CTL’s success on the Rhodes Tower project led to a contract to do a COR for the skyscraper next door. 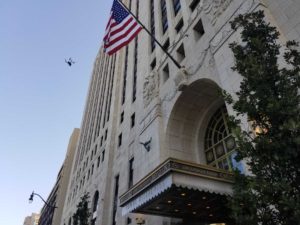 That building was the 47-story LeVeque Tower, an art deco-style classic that was fifth-tallest in the world when it was built in 1927. The LeVeque was the highest building in Columbus until the Rhodes Tower was completed. (The Rhodes is 74 feet taller despite having six fewer floors.)

After a recent renovation, the LeVeque Tower housed a hotel, apartments, and office space. The building’s art-deco ornamentation required more precise maneuvering of the drone, so the project took eight hours. Nevertheless, inspecting the building manually would have been considerably more time-consuming.

Not surprisingly for a building of its vintage, the inspection detected multiple structural issues for the owner to address.

This downtown landmark has had several expansions since it opened in 1993. Today, it offers 1.8 million square feet of space for exhibitions, meetings, trade shows, and other events.

CTL was subcontracted to track the source of water leaks in the convention center’s roof. Because water has a high heat capacity, areas were leaks occurred showed up warmer when using an infrared camera.

An infrared camera can detect these temperature differentials and help narrow the source of leaks. Adding an IR camera to a drone is a quantum leap over the speed of a worker walking the entire roof to do the same job. However, there are a couple of challenges: The inspection needed to be conducted after the sun had set, but before the anomalies had cooled to ambient temperature and the dew started to form.

All these issues gave CTL a small time window each evening to inspect the convention center roof. It took six days to complete the project, which may have taken weeks with conventional inspection techniques.

A drone is only as good as its owner

But as our experience with the Columbus Convention Center roof revealed, building envelope inspection is principally an engineering job: weighing the scientific principles that influence weather, building materials, and the timing of projects. It requires much more than competence in flying a drone and taking pictures.

We look forward to helping many more clients take advantage of our drone-flying opportunities and our full range of forensic engineering services.