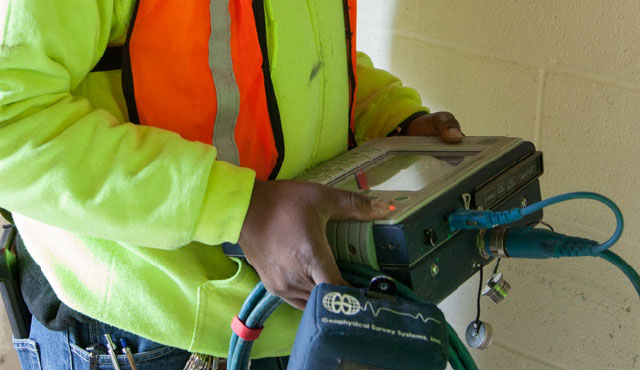 Of course, no one wants to create holes or otherwise destroy parts of a structure during testing, but sometimes it is necessary to get reliable and complete answers.

So what’s the difference between non-destructive vs destructive testing in construction, and how do you decide?

Of course, less damage – whether it’s testing concrete, masonry or other parts of the structure – is almost always preferable to owners and architects.

By contrast, destructive testing often involves removing a piece of material that needs to be tested, such as , coring into a structure or boring into the ground to collect samples for testing in a lab.

CTL conducts several types of non-destructive testing, but below are some of the most common:

Ground penetrating radar, otherwise known as GPR, uses electromagnetic (EM) energy waves to image the subsurface. While it is most commonly known for locating underground utilities, it can be especially effective on concrete and masonry walls to find hollow cells, grout, and reinforcing steel . This has a wide range of uses in construction but is especially useful in understanding if concrete or masonry was installed correctly. Particularly, if an owner or architect has doubts about a mason performing his job correctly. GPR can be a great tool used for non-destructive testing

It can also help owners and architects locate what is inside the floor or walls before moving forward. For instance, GPR can be used to locate electric lines, and PT cables in concrete floors so you can penetrate the slab safely.

Although it is known for underground utilities, GPR’s usefulness can be mixed, especially in Ohio where much of the ground is made up of clay. Tiny fiber optic wires, for instance, might be difficult to find if they are buried deep where the clay is wet. The radar won’t be able to see through the moisture in the clay below a certain depth, due to EM energy attenuation.

Although the probes and pins still create small holes, they are much less noticeable than a significantly larger core sample and easier to patch and repair.

Deciding what type of testing is right for you

Contact CTL today to find out more information about how non-destructive testing can benefit you.